The only thing better than a good movie is a good superhero movie. And nothing puts a goofy grin on a frazzled filmgoers’ face faster like seeing comics legend Stan Lee up on the big screen. But what the best five Stan Lee appearances? And can they be ranked in descending order?

At the end of this fancy flick, Peter is at a tough point in his life, but gets a big ol’ pep talk from our good old buddy, Stan Lee. Good on you, Stan!

In this classic superhero movie, Stan Lee walks past the camera… in a security guard uniform? I wouldn’t know what it’s like to be a security guard. But that’s not a problem for this character played by comics legend, Stan Lee!

In this epic, cosmic Marvel flick, Stan Lee’s a man’s man! He bravely sacrifices his tow truck to help out his trucker friends. This character has a lot of friends and a drivers license, so his life is like a weird parallel to my own, except I got my license two months ago.

2. Stan Lee eating out of the fridge 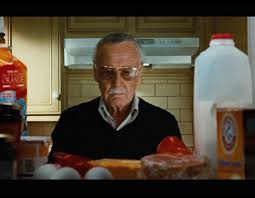 When I lived alone in Byron Bay last year, I didn’t own a car, so I had to walk about 20 minutes every time I wanted to get groceries. But I was also pretty depressed at the time, so I ate a lot, although that’s not really a valid reason since I’m just enabling negative behavior. It wasn’t uncommon during this time of my life that I’d be walking across the Byron highway by myself four times a week, carrying a six pack of Coke and a bag of M&Ms in eco-friendly Woolworths cooler bag, while a Monaco bar I bought at a gas station on the way home was hanging out of my mouth. And when I got home, I’d put my Coke in the fridge – just like the fridge Stan Lee owns in this movie!

In this historical Marvel flick, everyone’s favorite comic legend Stan Lee appears as an army general! Being a general is pretty manly and cool, this character probably knows what it’s like to not be a virgin.

Latest posts by ryandeel (see all)